So that got us thinking, what is the oldest city in Minnesota? And how old is that when you put it into perspective of St. Augustine or American Independence in 1776?

Because even if your Minnesota city or town is old, it isn’t really all that old in the grand scheme of things. For example, the Pyramids in Egypt were built around 2600 BC, a cool 4100 years before St. Augustine.

These are the 10 oldest cities and towns in the North Star State according to their ‘date of foundation’:

For being 168 years old, Brooklyn Park doesn’t look a day over 40. And the newest city in Minnesota? That would be Hermantown — a brand spanking 43 years old.

How We Determined When A City Was Founded In Minnesota… Or Is It Settled?

For the majority of cities in Minnesota, Wikipedia offers data on some kind of ‘date of foundation’ in the infobox. Unfortunately, because it’s Wikipedia and not a sprawling government bureaucracy, that can take the form of any of the following nomenclature (plus others):

We then ranked them from oldest to newest with Brooklyn Park turning out to be the matriarch of Minnesota at the ripe old age of 168.

Population: 79,462Founded: 1850
Age: 168
Formerly Brooklyn Township, the township split in 1860, with the southeast village later incorporating into Brooklyn Center and Crystal. Settlers from Michigan formally established the township and named it after their hometown of Brooklyn, Michigan. Brooklyn Park incorporated as a village in 1954, and incorporated as a city in 1969.

Population: 35,993Founded: 1850
Age: 168
The beginnings of Richfield date back to the 1850s, when it was still a small farming community. Close to Minneapolis and Fort Snelling, it was on the edge of a growing and expanding city with business and commerce not far away. One of the first settlers was Riley Bartholomew, a former General in the Ohio Militia who became a Richfield Justice of the Peace and a Minnesota State Senator. Bartholomew built a house on the east shore of Wood Lake in 1852, and the restored Riley Lucas Bartholomew House is listed on the National Register of Historic Places. Today, the house and site are maintained by the Richfield Historical Society. In the early days, Richfield extended as far north as Lake Street, and included present day Edina and parts of St. Louis Park and Hopkins on the west, and extended to the Mississippi and the Minnesota Rivers on the east, and to Bloomington on the south. On May 11, 1858, as Congress was admitting Minnesota into the Union, the early residents of Richfield had their first town meeting. That same year Richfield was named for the fertile farm land it encompassed. By 1879, the community’s first town hall was constructed. Early residents were German, Irish and families from the New England area. These residents were soon joined by immigrants from Sweden, Norway and Denmark. Population: 52,102Founded: 1850
Age: 168
Since the mid-19th century, Minnetonka has evolved from heavily wooded wilderness through extensive farming and thriving industrialization to its present primarily residential suburban character. The Dakota and Ojibwe Indians were the first people to settle in the area. They believed the land around Lake Minnetonka (minne meaning water and tonka meaning big) was the legendary home of an extinct race. The first recorded exploration of the area by European settlers was in 1822, when a group from newly constructed Fort Snelling made its way up Minnehaha Creek (then known as Brown’s Creek or Falls Creek) to the lake. In 1851, the Dakota sold the area including Minnetonka to the United States with the Treaty of Traverse des Sioux. The first census, the Territorial Census of 1857, lists 41 households. Twenty-nine of the heads of households are listed as farmers. The occupations of the remaining twelve are associated with the operations of Minnetonka Mill and a nearby hotel.

Population: 76,258Founded: 1852
Age: 166
Plymouth’s history can be traced back to the pre-Columbian period around 1400 to 1500 AD. The original inhabitants were the Dakota. Their encampment was at the north end of Medicine Lake. The name Medicine Lake is derived from the Dakota word Mdewakanton, meaning ‘Lake of the Spirit.’ The Dakota named the lake after a warrior overturned his canoe and his body was never recovered.[citation needed]

Antoine LeCounte, a guide and explorer, was the first settler to this area. He arrived in 1848, but did not settle until 1852. He carried mail from the Red River country to points south, trading goods to Native Americans for horses on the way. LeCounte built the first cabin at what is now East Medicine Lake Boulevard at 29th Avenue North.

Population: 300,820Founded: 1854
Age: 164
Burial mounds in present-day Indian Mounds Park suggest that the area was originally inhabited by the Hopewell Native Americans about two thousand years ago. From the early 17th century until 1837, the Mdewakanton Dakota, a tribe of the Sioux, lived near the mounds after fleeing their ancestral home of Mille Lacs Lake from advancing Ojibwe. They called the area I-mni-za ska dan (‘little white rock’) for its exposed white sandstone cliffs.

Following the Louisiana Purchase in 1803, US Army officer Zebulon Pike negotiated approximately 100,000 acres (40,000 ha; 160 sq mi) of land from the local Dakota tribes in 1805 to establish a fort. The negotiated territory was located on both banks of the Mississippi River, starting from Saint Anthony Falls in present-day Minneapolis, to its confluence with the Saint Croix River. Fort Snelling was built on the territory in 1819 at the confluence of the Mississippi and Minnesota Rivers, which formed a natural barrier to both Native American nations. The 1837 Treaty with the Sioux ceded all local tribal land east of the Mississippi to the U.S. Government. Taoyateduta (Chief Little Crow V) moved his band at Kaposia across the river to the south. Fur traders, explorers, and missionaries came to the area for the fort’s protection. Many of the settlers were French-Canadians who lived nearby. However, as a whiskey trade flourished, military officers banned settlers from the fort-controlled lands. Pierre ‘Pig’s Eye’ Parrant, a retired fur trader-turned-bootlegger who particularly irritated officials, set up his tavern, the Pig’s Eye, near present-day Lambert’s Landing. By the early 1840s, the community had become important as a trading center and a destination for settlers heading west. Locals called the area Pig’s Eye (French: L’Œil du Cochon) or Pig’s Eye Landing after Parrant’s popular tavern. Population: 19,232Founded: 1854
Age: 164
On July 29 and September 29, 1837, treaties were signed between the US government and the local Ojibwa and Dakota nations that allowed settlement in the St. Croix Valley. The town was founded by settlers drawn by the area’s then-abundant lumber and river traffic, making it one of Minnesota’s oldest towns, preceding Minneapolis by several years. Stillwater was officially incorporated as a city on March 4, 1854 (the same day as St. Paul). The city was named for the calm waters of the St. Croix River. 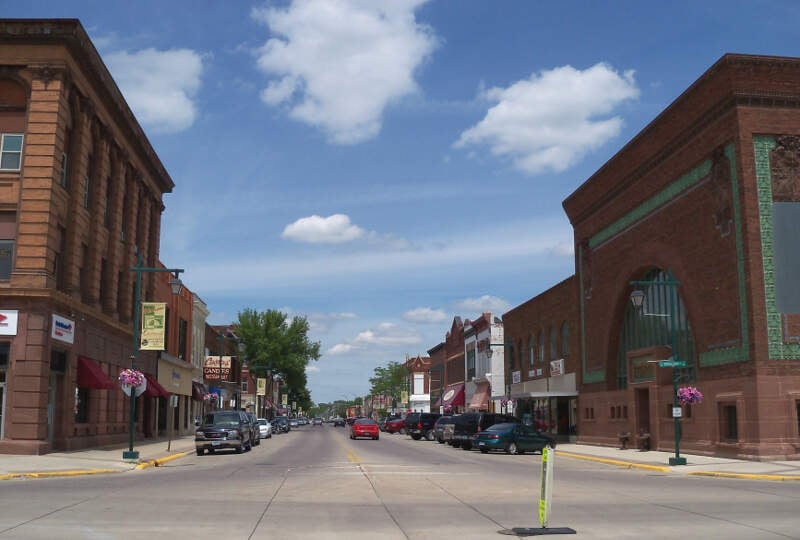 Population: 25,613Founded: 1858
Age: 160
Owatonna was first settled in 1853 around the Straight River. The community was named after the Straight River, which in the Dakota language is Wakpá Owóthana. A popular, but apocryphal, story is that the town is named after ‘Princess Owatonna,’ the daughter of a local Indian chief who was supposedly healed by the magic waters of a nearby spring. The earliest the Owatonna area was settled was in 1854 and platted in September 1855, but it was incorporated as a town August 9, 1858, then as a city on February 23, 1865. Population: 50,603Founded: 1860
Age: 158
Edina began as part of Richfield Township, Minnesota. By the 1870s, 17 families, most of them immigrating as a result of the potato famine in Ireland, had come to Minnesota and claimed land in the southwest section of what was then Richfield Township. They were followed by settlers from New England and Germany, who claimed additional land near Minnehaha Creek. The Baird and Grimes neighborhoods (which are both listed on the National Register of Historic Places), and the Country Club District (then known as Waterville Mills) are located in the northeast part of Edina, and were among the first areas to be established. The area then known as the Cahill Settlement, at West 70th Street and Cahill Road, was also an early community center and the home of Cahill School. Population: 11,099Founded: 1872
Age: 146
Grand Rapids was founded as a logging town, as the Mississippi River provided an optimal method of log shipment to population centers. The predecessor of the Blandin paper mill opened in 1902. Population: 17,374Founded: 1878
Age: 140
The site which is now Anoka was first settled by immigrants in 1844. By the mid-1850s Anoka had grown to include a school, a store and a flour mill. In 1856, C. C. Andrews described Anoka as a ‘large and handsome village’ and noted that pine logs were floated down the Rum River to sawmills there. The city was formally incorporated in 1878. The name Anoka was derived from two Indian words. The native Dakota used A-NO-KA-TAN-HAN, meaning ‘on both sides’, or ‘from both sides’, referring to its location on the banks of the Rum River. The native Ojibwa used ON-O-KAY, meaning ‘working waters’.

And now, let’s raise our glasses, to the next 100 years of existence for these cities and towns in the North Star State.

And for those wondering, here are the newest additions to Minnesota: