Editor’s Note: We updated this article for 2020. This is our sixth time ranking the cities in Oklahoma with the largest Native American population.
Swipe left for slideshow. Article continues below.

And today, we are going to look at the percent of the population in Oklahoma that are Native American.

Here are the 10 cities in oklahoma with the largest Native American population in 2020:

Which city in oklahoma had the largest Native American population?

Anadarko took the number one over all spot for the largest Native American population in oklahoma for 2020. 42.28% of Anadarko identify as Native American.

To see where oklahoma ranked as a state on diversity, we have a ranking of the most diverse states in America.

And if you already knew these places were Native American, check out the best places to live in oklahoma or the most diverse places in oklahoma.

Cities In Oklahoma With The Largest Native American Population For 2020

Anadarko is a city in Caddo County, Oklahoma, United States. This city is fifty miles southwest of Oklahoma City. The population was 6,762 at the 2010 census, a 1.8 percent gain from 6,645 at the 2000 census. It is the county seat of Caddo County. Tahlequah is a city in Cherokee County, Oklahoma, United States located at the foothills of the Ozark Mountains. It is part of the Green Country region of Oklahoma and was established as a capital of the 19th-century Cherokee Nation in 1839, as part of the new settlement in Indian Territory after the Cherokee Native Americans were forced west from the American Southeast on the Trail of Tears. Sallisaw is a city and county seat of Sequoyah County. The population was 8,880 at the 2010 Census, an 11.2 percent increase from 7,891 at the 2000 census. Sallisaw is part of the Fort Smith, Arkansas-Oklahoma Metropolitan Statistical Area.

I have lived in Sallisaw sense 1997. This town’s crime rate is not the best and housing is too high if your trying too buy a home. I will be the first too tell you that everybody is up in everyone else’s business and everybody is sleeping with everybody else’s wife. The good thing,s about Sallisaw is the Farmers market and Cruse night, diamond days and the ppl are both friendly and jerk’s. The casino is good for fun and there are places you can work such as slpt, avagen and celphom plus fast food restaurant,s. The view is beautiful and lake Tenkiller is not too far away neither is ft Smith Ark and there are lots off places too work. Every place has its own attitude and too know it you must first become part off it so good luck and may G*d Bless you on your journey where ever you decide too go. Seminole is a city in Seminole County, Oklahoma, United States. The population was 6,899 at the 2000 census. Seminole experienced a large population growth in the 1920s due to an oil boom. Tecumseh is a city in Pottawatomie County, Oklahoma, United States. The population was 6,457 at the 2010 census, a 5.9 percent increase from 6,098 at the 2000 census. It was named for the noted Shawnee chief, Tecumseh, and was designated as the county seat at Oklahoma’s statehood. A county-wide election moved the seat to Shawnee in 1930. Okmulgee is a city in Okmulgee County, Oklahoma, United States. The population at the 2010 census was 12,321, a loss of 5.4 percent since the 2000 census figure of 13,022. It has been the capital of the Muscogee Nation since the United States Civil War. The name is from the Creek word oki mulgee which means “boiling waters” in English. Other translations put it as “babbling brook” or ‘Effluvium’. The site was chosen because of the nearby rivers and springs. Okmulgee is 38 miles south of Tulsa and 13 miles north of Henryetta via US-75.

Muskogee is a city in and the county seat of Muskogee County, Oklahoma, United States. Home to Bacone College, it lies approximately 48 miles southeast of Tulsa. The population of the city was 39,223 as of the 2010 census, a 2.4 percent increase from 38,310 at the 2000 census, making it the eleventh-largest city in Oklahoma.

I was born in Muskogee and grew up in Ft. Gibson, moved to Muskogee and the back to the Fort. It is home to me. And I wouldn’t trade my life there for anywhere else. 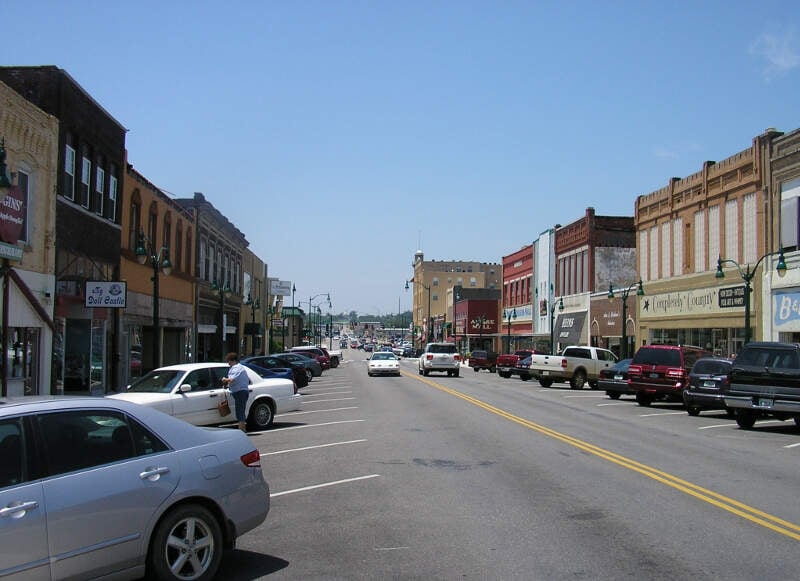 Claremore is a city and the county seat of Rogers County in northeastern Oklahoma, United States. The population was 18,581 at the 2010 census, a 17.1 percent increase from 15,873 at the 2000 census. Located in the Ozark Mountains foothills, the city is part of the Tulsa Metropolitan Area and home to Rogers State University. It is best known as the birthplace and home of early 20th-century entertainer Will Rogers.

Crime is relatively low. Most people think very black and white. Good luck finding thought provoking conversation. It usually doesn’t happen. There’s a college in town that’s okay. People are usually nice to your face. A few great people and a lot of backwards people. Not much to do here Definitely not the best in Oklahoma, but definitely not the worst.

We still believe in the accuracy of data — especially from the census. So that’s where we went to get the breakdown of race across oklahoma.

We limited our analysis to places with a population greater than 5,000 people. That left us with 73 cities.

We then calculated the percent of residents that are American Indian and Alaska Native. The percentages ranked from 42.28% to 0.08%.

Read on for more information on how the cities in oklahoma ranked by population of American Indian and Alaska Native residents or, for a more general take on diversity in America, head over to our ranking of the most diverse cities in America.

There You Have It – Native American Populations Across Oklahoma

If you’re looking for a breakdown of Native American populations across Oklahoma according to the most recent data, this is an accurate list.

If you’re curious enough, here are the least Native American places in Oklahoma:

What Are The Most Native American Places In Oklahoma?