You may end up landing your dream job, but the income might not be what it takes to live near the job. What do you do? Reduce your cost of living, of course.

Every state has affordable areas, but New Jersey is one that offers some substantially cheaper cities than some of the surrounding states, ahem, New York.

But what is good about Jersey? It is actually a great place to start your career.and your savings account.

New Jersey is known for its food. Specifically, this Garden State has some amazing blueberries and corn. If fresh produce isn’t your thing, don’t worry because New Jersey is also known as the Diner Capital of the World. You can start your day with a nice coffee and a bagel.

New Jersey is also close to major urban centers, especially New York City. If you want to work and spend your weekends enjoying the New York City high-life, but don’t want to spend a killing on rent, then New Jersey will soon be called your home.

Interested yet? We know we love a good “Taylor Ham” pork roll on the way to NYC.

The 10 Most Affordable Places To Live In New Jersey

We looked at several factors to create our top ten list, which included income to rent/house price ratios. This way, you will know where the cost of living is the lowest so your income will go the farthest.

What’s the cheapest place to live in New Jersey? Topping our list comes Clayton, a city right over the Pennsylvania-New Jersey border near Philly. You can live in New Jersey and work in Philadelphia: a great option for both your career and your savings.

Other dollar-saving cities in New Jersey include Stratford and Barrington. All in all, these cities on our list have one thing in common, which is their ability to give you great savings on rent. or even houses.

Interested to learn more about our methodology? Read on to learn how we crunched the numbers and to see how your favorite city in New Jersey stacked up on the affordability ranking.

And if you already knew these places were cheap, check out some more reading about New Jersey and the cheapest places in the country:

A south Jersey borough of 8,688, Clayton ranks as the state’s first least expensive place to call home. There’s plenty to keep you occupied on a budget in Clayton, like Scotland Run Park and the continuous stream

Clayton is also quite close to Philadelphia, so if you’re craving some big-city amenities, you don’t have to go far.

Clayton also has incredibly safe streets, which has contributed to a significant increase in property values in recent years. The overall cost of living in Clayton is much cheaper than most of New Jersey, especially in terms of housing. If you want to live the high life in New Jersey without spending big bucks, there’s few better than Stratford. The Camden County borough has the fifth lowest ratio of home price to income in the state, so you won’t feel like you’re living in one of the most expensive states in America if you move to Stratford. At $180,900, Stratford has one of the lowest median home prices on this list, and Stratford residents earn a median income of $78,309, so there’s no problem paying the mortgage off. Stratford also scored a 8/10 or higher on almost all of our Snackability scores, so it’s an all-around great place to call home.

Stratford is located a half hour southeast of Philadelphia. Somerdale is the third most affordable place in New Jersey thanks to a combination of low home prices and well-paid residents. Folks in Somerdale pay a median price of $178,000 for homes and earn a median income of $73,498, giving Somerdale the ninth lowest ratio of home price to income in the state. Rent in Somerdale is slightly cheaper than the top two cities on this list at $895, but taken as a proportion of income, renting in Somerdale is less cost effective than buying. Hiking at Kirkwood Lake is free, so nature-lovers won’t have to break out their wallets to have a good time in Somerdale.

In what’s becoming a pattern, Somerdale is also in Camden County, within a half hour of Philadelphia. Another Camden County suburb of Philadelphia, Barrington ranks as the fourth cheapest place to live in New Jersey. Buying a home in Barrington will set you back $189,400, but residents also earn a median income of $78,708, so you’ll be able to pay off that mortgage before the new-house smell has time to wear off. If you’re into fishing, you can cut down on your entertainment and grocery budget by casting your line out at the nearby Haddon Lake. Audubon is another Philadelphia suburb that won’t break the wallet, let alone the bank. With a median rent of $1,094 and a median home price of $223,200, housing in Audubon is slightly pricier than in Stratford. However, Audubon residents also earn slightly more, with a median income of $90,335. That gives Audubon the 12th best ratio of home price to income in New Jersey. If you’re trying to stretch your cash even further, hanging out at Cooper River Park won’t cost you a thing. 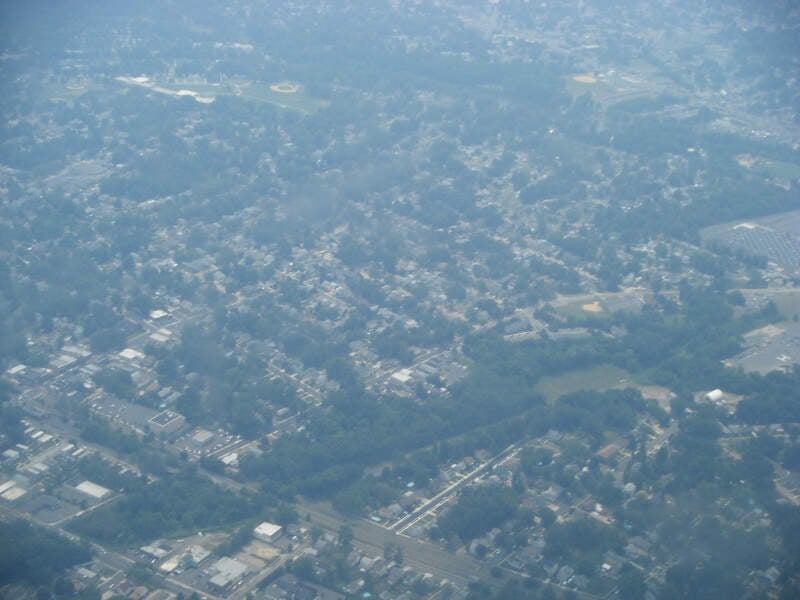 Yet another Camden County suburb of Philadelphia, Runnemede is the sixth most affordable place in New Jersey. At a median price of $163,000, Runnemede has the second cheapest homes you’ll see on this list. Runnemede residents earn a median income of $71,495, giving the borough the fourth best ratio of home price to income in the state. Having a picnic and watching the sun set over Big Timber Creek at Runnemede Lake Park is an always-accessible cheap option for a date night. Despite having some of the most expensive housing on this list, Berlin ranks as the seventh cheapest city in New Jersey. The median rent in Berlin is $1,313, which is the highest you’ll see on this list. However, that’s still about 70% cheaper than the average rent in New Jersey. Berlin residents also earn enough to easily cover their housing, with a median income of $96,065. If you’re buying in Berlin, the median home price is $238,300, which may seem steep, but still represents the 13th lowest home price to income ratio in New Jersey.

Berlin is located about 20 miles southeast of Philadelphia. A suburb of Philadelphia, located about 20 miles southeast and across the river, is Pine Hill our eighth cheapest place to live in new jersey for 2022. Some the main attractions in town include great parks and a wonderful golf course – Pine Valley Golf Club. For those who like to take in a museum or two, Philadelphia is less than 30 minutes away for a day trip with the family.

When it comes to cost of living, it’s hard to beat Pine Hill. The overall cost of living is 20% lower than the state average and housing prices are about as low as you’ll find in the Garden State. Pine Hill has the eighth cheapest homes and 12th cheapest rent anywhere in new jersey. The median home price in Pine Hill is $135,000, while you can find a place to rent for just $1,014. Haddon Heights is the ninth cheapest place in New Jersey and the only place on this list to get a perfect 10/10 on our overall Snackability score. While rent in New Jersey may be 20% more than the national average, you wouldn’t know it in Haddon Heights, where the median rent is $1,095, less than half the statewide average. With residents earning a median income of $97,955, Haddon Heights has the 15th best rent to income ratio in the state. At $284,300, Haddon Heights has the most expensive median home price on this list, but because of the high median income, it’s still fairly affordable to buy here.

Haddon Heights is located in — you guessed it — Camden County, about 20 minutes outside of Philadelphia. Millville is a city in Cumberland County, New Jersey, United States. As of the 2010 United States Census, the city’s population was 28,400, reflecting an increase of 1,553 from the 26,847 counted in the 2000 Census, which had in turn increased by 855 from the 25,992 counted in the 1990 Census. Millville, Bridgeton and Vineland are the three principal New Jersey cities of the Vineland-Millville-Bridgeton Primary Metropolitan Statistical Area which encompasses those cities and all of Cumberland County for statistical purposes.

What county in New Jersey has the lowest cost of living?

What is the cost of living in New Jersey?

What is the cheapest housing market in New Jersey?

Methodology: How We Determined The Most Affordable Places To Live In The Garden State For 2022 You can then compare these metrics in each of the places in New Jersey to figure out which is the least expensive.

So we used that cost of living index in order to rank all of the 185 places in New Jersey that have more than 5,000 people.

The place with the lowest cost of living in New Jersey according to the data is Clayton. You can download the data here.

Summary: There You Have It Mr. Or Mrs. New Jersey Cheapskate

If you’re looking at the cost of living numbers in New Jersey, this is an accurate list of the most affordable places to live in New Jersey for 2022.

Here’s a look at the most expensive cities in New Jersey according to the data:

The Most Affordable Places To Live In New Jersey

Editor’s Note: We updated this article for 2022. This is our ninth time ranking the cheapest places to live in New Jersey.