Want to know where the richest of the rich congregate in the Bayou State? Read on to see what the wealthiest cities in Louisiana are.

While Louisiana is most famous for New Orleans, you won’t find the Big Easy on this list. Some of its more affluent suburbs like Harahan and Kenner did make the cut, however. And while the capital Baton Rouge didn’t dazzle us with riches, its suburb of Zachary did. 9 out of 10 of the cities on this list are also featured on our list of best places to live in Louisiana. It makes sense that the folks with the most money would want to live in the best places the state has to offer.

So how did Homesnacks determine which cities have the most going for them in terms of dollars and cents? We’ve taken the guesswork out of it by using science and data to determine where you can get gold-plated crawfish in Louisiana. By looking over the Census data from the American Community Survey for 60 Louisiana cities with 5,000, and then looking at each city’s numbers on unemployment, poverty, and median income, we were able to determine the richest spots in the state.

What do you need to earn to live in the richest cities in Louisiana? Luckily, it’s not a discouragingly high number. The top five places on this list have an average median income of around $75,000/year, and you can do well for yourself in the city of Scott on under $50,000/year.

So if you want to know where Louisiana’s elite go to make money for the highest quality Cajun food, private suites for Saints games, and the most extravagant Mardi Gras celebrations, read on.

You may be asking how Homesnacks arrived at the conclusion that the cities above are the richest in Louisiana. Well, first we narrowed the potential places down to those with a population of at least 5,000. Then we looked at which cities had the lowest rates of poverty and unemployment and the highest median household income.

That left us with 60 cities to score and the data to answer the question: what’s the wealthiest city in the Louisiana? According to the data, Youngsville is the place in Louisiana with the richest of the rich for 2023.

So if you want to live like an aristocrat in one of the country’s great cultural hubs, be sure to check out the list below.

Rich people not your cup of tea? Feel free to check out some more reading about Louisiana: Methodology: How We Determined The Richest Places In Louisiana For 2023 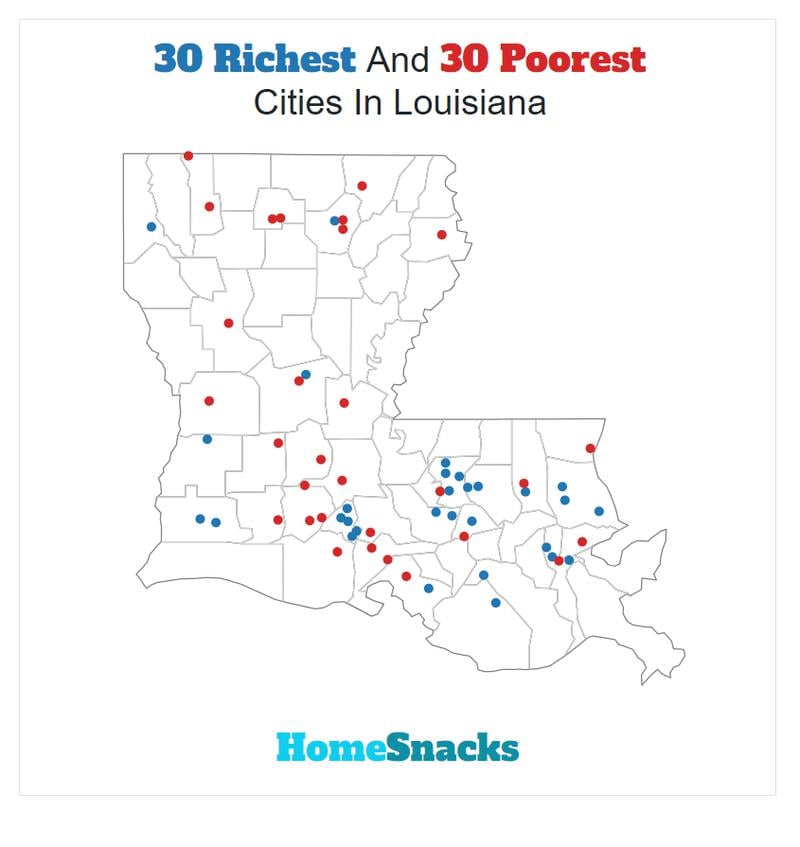 After we collected the data for all 60 places with more than 5,000 people in Louisiana, we ranked each place from 1 to 60 for each of the criteria, with 1 being the richest.

We then averaged all the rankings for a place into a “Rich Score” with the place having the lowest overall Rich Score, Youngsville, crowned the “Richest City In Louisiana For 2023”. You can download the data here.

You can learn more about the top ten below or skip to the end to see the rankings for all 60 places.

Summary: The Wealthiest Places In Louisiana For 2023

Like we said earlier, when we set out to identify the richest places in Louisiana, we weren’t sure what we’d encounter, but it ended up being some of the best places to live in Louisiana.

If you’re curious enough, here are the poorest cities in Louisiana, according to data:

Editor’s Note: Data has been updated for 2023. This is our tenth time ranking the richest cities in Louisiana.