You don’t have to win the lottery or detassel hundreds of acres of corn by yourself, to live in most cities in Illinois: it’s extremely affordable.

Yes, learning the value of the dollar is important, but you don’t want to stress about it daily when looking for a great place to live, good food, and low cost of living. Well, you don’t have to look any further if you choose Illinois to set up shop. The Land of Lincoln is one of the most affordable in the country.

Most people think that Illinois cities are filled with a bunch of fancy steakhouses, Lincolnshire snobs, and a boatload of wealthy farmers. While all this might be true for some Illinois cities, the country bumpkins and city folk of this Midwest state would beg to differ. Illinois cities have a lot to offer to all income levels; and surprisingly, there are cities in this flyover state that won’t break your bank.

Now, don’t go all crazy and drown your financial woes at the local Family Dollar. Just because The Prairie State is affordable, doesn’t mean it’s all ‘subsidized housing’ cheap. It means the cost of living is doable. And that means you have more money to do the fun stuff that Illinois has to offer: like buying Chicago Bears’ season tickets or taking an RV trip to the Shawnee National Forest. #GoBears

So, grab yourself a fried tenderloin the size of your head and a cold pop, and read on.

The 10 Most Affordable Places To Live In Illinois

What does the most affordable place to live in Illinois look like? Well, after crunching data from the US Census in terms of median housing costs, median income, and overall cost of living for cities with over 5,000 residents, Monmouth brings home the bacon as the cheapest place in Illinois.

And even though Monmouth may be the cheapest, every place in the top ten let’s you live like a king on a pauper’s salary.

So, if you care about home values, cost of living, and high quality of life, take a look at the list below to find the most affordable places in Illinois, where your salary will let you live like royalty.

And if you already knew these places were cheap, check out some more reading about Illinois and the cheapest places in the country:

The 10 Cheapest Places To Live In Illinois For 2022

The county seat of Warren County in the western part of the state, Monmouth ranks as the most affordable place to call home in Illinois. Rent in Monmouth is the seventh cheapest statewide, with a median price tag of $580.

If you decide to make Monmouth your permanent home, the median price of a home here is very reasonable at $79,200, especially considering that the average household here earns $50,740 annually. Low housing costs are just part of why Monmouth’s overall cost of living score is only 79.

And just because it’s affordable doesn’t mean that Monmouth skimps on quality of life. There are plenty of local museums around, for starters. There’s also the annual Prime Beef Festival, which takes place the week after Labor Day each year.

It kicks off with one of the largest parades in Western Illinois, so be ready to celebrate if you’re moving to Monmouth. Hillsboro is the second most affordable city in Prairie State, mostly thanks to having the third lowest home price to income ratio in Illinois. The median home price in Hillsboro is $89,400, but when you’re earning a median income of $61,293, the mortgage will be paid off before you know it. At $689/month, Hillsboro has the highest median rent on this list, but thanks to the city’s solid median income, it doesn’t have the worst rent to income ratio. If you’re still trying to maximize your savings in Hillsboro, bird-watching at Bremer Sanctuary won’t cost you a dime.

In what’s becoming a pattern, Hillsboro is just an hour outside of Springfield. When it comes to buying a home on a budget, there’s few better on this list than Pana. The city also has a super low unemployment rate, so you should have no trouble getting a job with a median income of $47,701. The median home price in Pana is $74,800, giving the city the ninth lowest ratio of home price to income in Illinois, the best of any city listed here. If you feed yourself on catfish from Pana Lake, you can further cut down on both your entertainment and food budget all at once.

Pana is located about an hour southeast of Springfield. Creve Coeur wasn’t even in the top 50 cheapest places to live in Illinois last year, so this jump up to the #5 spot represents a seismic shift in the village’s affordability. To what can we attribute this massive change? A combination of higher pay and lower home prices give Creve Coeur the 16th best ratio of home price to income in the state. Folks in Creve Coeur earned a median income of $46,250 and paid a median price of $76,800 in 2022. If you’ve already got all the gear you need, mountain-biking at Creve Couer Independence Park is a cheap way to spend your weekends.

Creve Coeur is a suburb of Peoria. Located in southwestern Illinois about 70 miles east of Saint Louis, is Salem — the sixth most affordable place to live in illinois. This stop off of I-57 boasts an overall cost of living about 20% lower than the state average thanks in large part to affordable costs of housing. The median home price is $78,900, while rent is the 24th cheapest in illinois at $638.

In terms of what all of this affordability buys you, Salem offers affordable options for things to do with the whole family from local disc golf courses to the town’s aquatic center. You can also peruse the offerings at local, small town antique shops and fine dining on main street. East Alton is a village in Madison County, Illinois, United States. The population was 6,301 at the 2010 census.

Granite City is a city in Madison County, Illinois, United States, within the Greater St. Louis metropolitan area. The population was 29,849 at the 2010 census, making it the second largest city in the Metro East and Southern Illinois regions, behind Belleville. Officially founded in 1896, Granite City was named by the Niedringhaus brothers, William and Frederick, who established it as a steel making company town for the manufacture of kitchen utensils made to resemble granite. Chester is a city in and the county seat of Randolph County, Illinois, United States, on a bluff above the Mississippi River. The population was 8,586 at the 2010 census. It lies 61 miles south of St. Louis, Missouri. Jerseyville is a city in Jersey County, Illinois, United States. As of the 2010 U.S. census, the city had a total population of 8,465. It is the county seat of Jersey County, and is the largest city in the county. What county in Illinois has the lowest cost of living?

What is the cost of living in Illinois?

What is the cheapest housing market in Illinois?

Methodology: How We Determined The Most Affordable Places To Live In The Prairie State For 2022 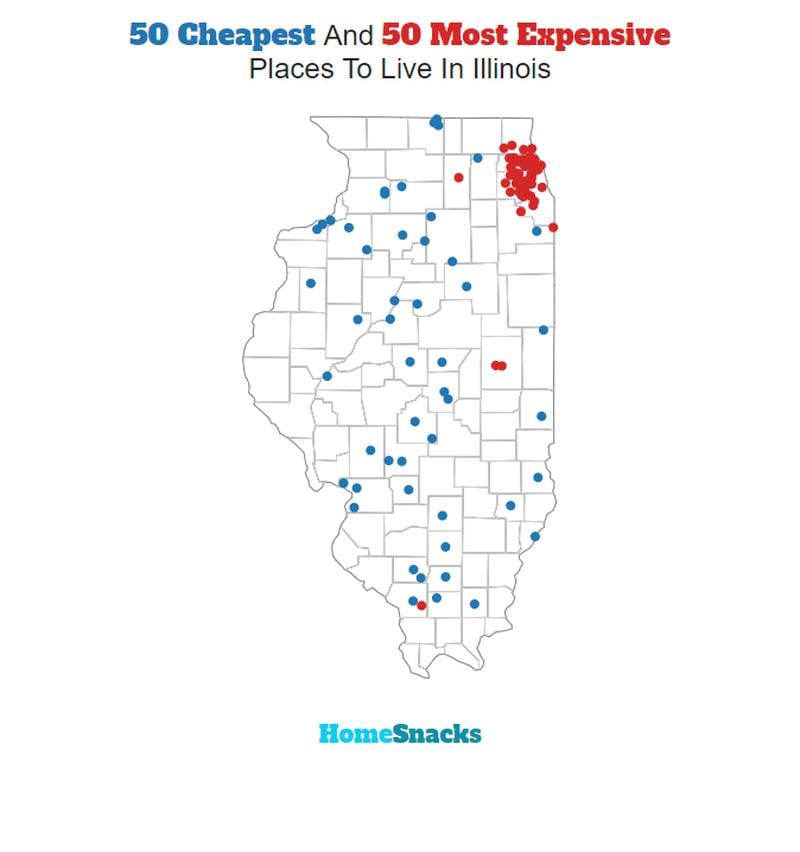 Best Places To Buy A House In Illinois

You can then compare these metrics in each of the places in Illinois to figure out which is the least expensive.

So we used that cost of living index in order to rank all of the 329 places in Illinois that have more than 5,000 people.

The place with the lowest cost of living in Illinois according to the data is Monmouth. You can download the data here.

Summary: There You Have It Mr. Or Mrs. Illinois Cheapskate

If you’re looking at the cost of living numbers in Illinois, this is an accurate list of the most affordable places to live in Illinois for 2022.

Here’s a look at the most expensive cities in Illinois according to the data:

The Most Affordable Places To Live In Illinois

Editor’s Note: We updated this article for 2022. This is our ninth time ranking the cheapest places to live in Illinois.