We used data and science to determine the places in Texas where everyone sleeps safe and sound.

Chris Kolmar, HomeSnacks
Updated: 2020-12-15
Editor's Note: This article has been update for 2021. This is our sixth time rankings the safest places to live in Texas. All the data comes from the FBI's Crime In The USA 2019 report.

Texas is best known as the Lone Star State, but many are familiar with other famous Texan tidbits:

Like the enormous amount of delicious food. BBQ. Fried Okra.

They all may create an instant heart attack which isn't so safe for you. But you know what is safe? The places in Texas we are going to talk about today.

While Texans love their beaches, rodeos, and well, Texas, they like being safe and sound at home more than anything. According to our other analysis, Texas ranks #26 richest in America and we ranked the state as the 38th safest. Oil, architecture, engineering, and power are some of Texas's top industries.

Food, beaches, and space aside, Texas has a lot to offer and it is no surprise that Texas is one of America's most populous states. 36% of Texans are college-educated and with top colleges and universities like Rice, that stat will undoubtedly continue to increase. So the question remains, where are the safest cities in the cowboy state?

I'm sure it is no surprise to the residents of Trophy Club that they ranked number one. It is, however, very crowded at the top: the list of safe and comfortable places to live in texas is quite long.

For more reading on safe places to live in and around Texas, check out: Trophy Club is no stranger to our lists -- they always find a place somewhere on the positive rankings. It has been acknowledged multiple times by D Magazine as one of the best places to live in Dallas-Fort Worth.

This year, they rank as the safest city in Texas thanks to a drop in violent crimes.

We're sure the town will add this ranking to their trophy case. Am I rite? Fate sounds like an ominous name, but if you're fated to live here, know that you'll be in the second safest spot in Texas. Fate is one of the fastest growing cities in Texas, with a population explosion of over 1,000% since 2000.

Folks just can't get enough of this Dallas suburb. It's pretty impressive that a place could grow so fast and still only record 6 violent crimes over a year. On top of that, Fate had the sixth safest lowest property crime rate in Texas over 2019.

Fate has rock-bottom poverty levels, a sub 3% unemployment rate, and your typical household rakes in around $110373 each year. The only catch is that overall cost of living in Fate is 22% higher than the Texas average. Fulshear made a big jump up to the #3 spot this year, considering it wasn't even in the top ten on last year's list. While Fulshear didn't take the gold medal in either violent or property crime in Texas, solid rankings in each category earned it the third place ranking overall. Fulshear had about six times less violent crime and four times less property crime than the statewide average. Whether you're playing disc golf or walking along the stream, you'll be totally safe at Flewellen Creek Park.

Fulshear scored a 9.5/10 on our overall snackability score with impressive ratings in education, housing, and of course, safety! Fulshear is located an hour west of Houston. A quickly-growing El Paso suburb, Horizon City ranks as the fourth safest place in Texas. The US-Mexico border is often considered a dangerous place, but Horizon City belies that theory by having the eighth safest lowest violent crime rate in the state.

The overall crime rate in Horizon City is 76% below the national average, meaning you can visit any of the city's parks without fear of criminal activity. Colleyville is a city and suburb of Fort Worth located in northeast Tarrant County and it fell from atop it's perch of the safest place in Texas this year. It now stands at number six.

A small increase in property crime is to blame, but nothing to get worried about as it still has 10 on our SnackAbility Score -- putting it in the top 5% of places to live in the country. Murphy, or I would probably call it, Murph, ranks as the sixth safest city in Texas, up a bit from its ranking last year.

The suburb of Dallas dates back to the 1800s, which is probably why it's so safe -- people pay more attention around old things. Fair Oaks Ranch ranks as the fifth safest city in Texas thanks to blend of moderate safety in both categories. It could be fair to say that Fair Oaks Ranch is a fairly great place to live.

It's a burb of San Antonio and should have a fair on the fairgrounds each year if doesn't. I can see it now "Come to the Fair Oaks Ranch fairgrounds for the Texas state fair." Situated in Bailey County, the city of Muleshoe doesn't have a very impressive name, but its crime numbers are incredible. The city only had 20 property crimes over 2019, giving it the third safest lowest property crime rate in Texas.

Plus, nature-lovers enjoy being able to spot all sorts of unique wildlife at the Muleshoe National Wildlife Refuge.

As if all that wasn't reason enough to move to Muleshoe, consider that it's also one of the most affordable places in Texas, with a home price to income ratio that allows residents to save more or put their cash to other uses. Located in the Dallas-Fort Worth area, Highland Village clocks in as Texas's ninth least dangerous place to live.

Poverty and unemployment rates are low in Highland Village, which surely contributes to its low crime rate. I mean, when the median household earns $147222, there's not really much point in committing crimes, is there? Homes sell for around $360600 and the overall cost of living is about 24% higher than the national average.

But it's well worth it, considering you have awesome amenities around, like theThe Shops at Highland Village. Most property crimes that go down in Highland Village are just larcenies, and the city only recorded 8 violent crimes over 2019. Not going to lie if you want to live in University Park, one of the best Dallas suburbs around, you'll need deep pockets.

Homes in University Park sell for a median price of $1295500, and the overall cost of living score is 216, while the national average is 100.

That's just the price you pay to live in the place with the sixth safest lowest violent crime rate in Texas. The property crime rate in University Park is higher than most places on this list, but with some improvements in that category, you might just find this city in the top five by next year.

How we calculated the safest cities in Texas for 2021 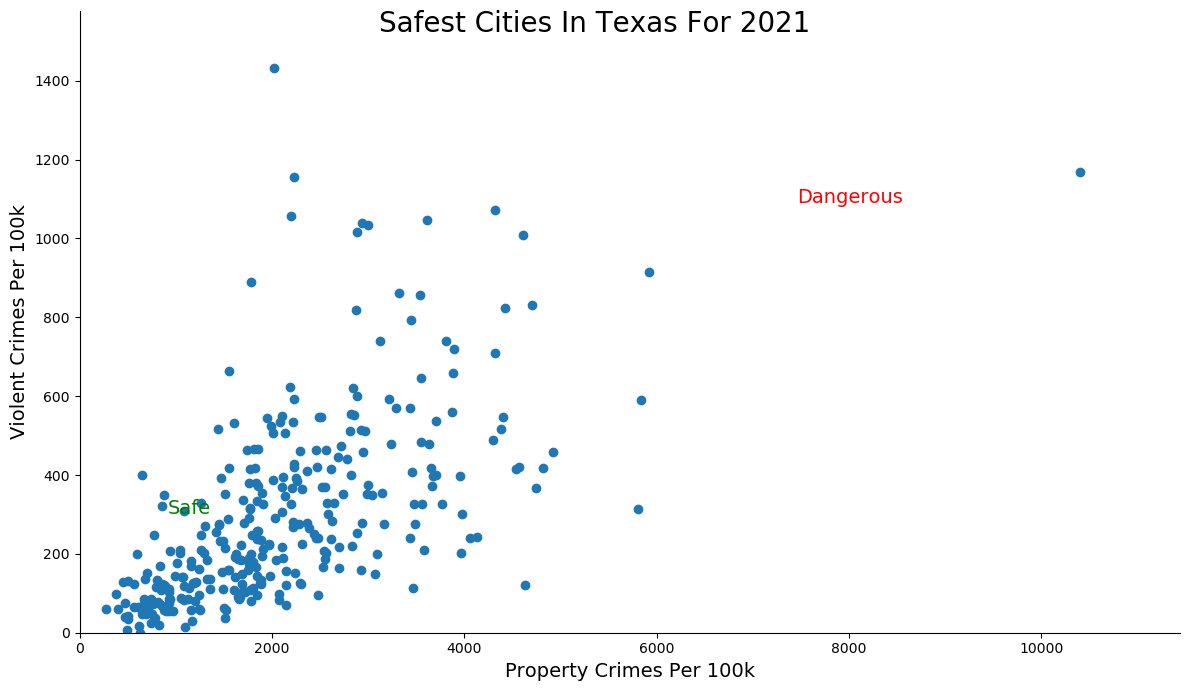 While there are surveys and public polls on what cities in a state are the safest, we didn't want to rely on speculation and opinion. Instead, we looked at the hard numbers from the FBI's most recent report of crime (Published Sept 2020) in Texas.

Specifically, we analyzed the FBI's Uniform Crime Report which summarizes the number of property crimes and violent crimes in each city per year. We used two criteria:
Best Places To Retire In Texas

For example, there were a total of 65 crimes committed in Trophy Club which had a reported population of 13,031. That means the number of crimes per capita is 0.005 which translates into a 1 in 200 chance of being the victim of a crime.

We only looked at cities that have populations of more than 5,000 people reported to the FBI in 2019, the last reporting year. This left us with a total of 312 of the biggest cities in Texas to rank.

We ranked each city for each criteria from 1 to 312 where 1 in any particular category is the safest.

Next, we averaged each places two criteria to create a Safety Index. We crowned the place with the lowest overall Safety Score "The Safest Place In Texas" with any ties going to the bigger city. You can download the data here.

The safest city in Texas, based on our criteria, is Trophy Club. The most dangerous city in Texas? Humble, where residents had a 1 in 8 chance of being the victim of a crime.

Looking at the data, you can tell that Trophy Club is as safe as they come, according to science and data.

Here's a look at the most dangerous cities in Texas according to the data: